No matter what holiday traditions you might follow, the rush of these final days on the calendar likely reminds you to reflect on the past year, and make plans for the new one.

You’re probably thinking about family, friends, colleagues, and the less-fortunate in your community, and hoping that things get—and stay—brighter for them in the years to come.

That’s what’s on my mind at this time of year, too.

If we asked British Columbians, and especially BC Liberal Party members, what they’re thinking about and wishing for, the “wish list” for a winning and prosperous 2022 might look something like this: 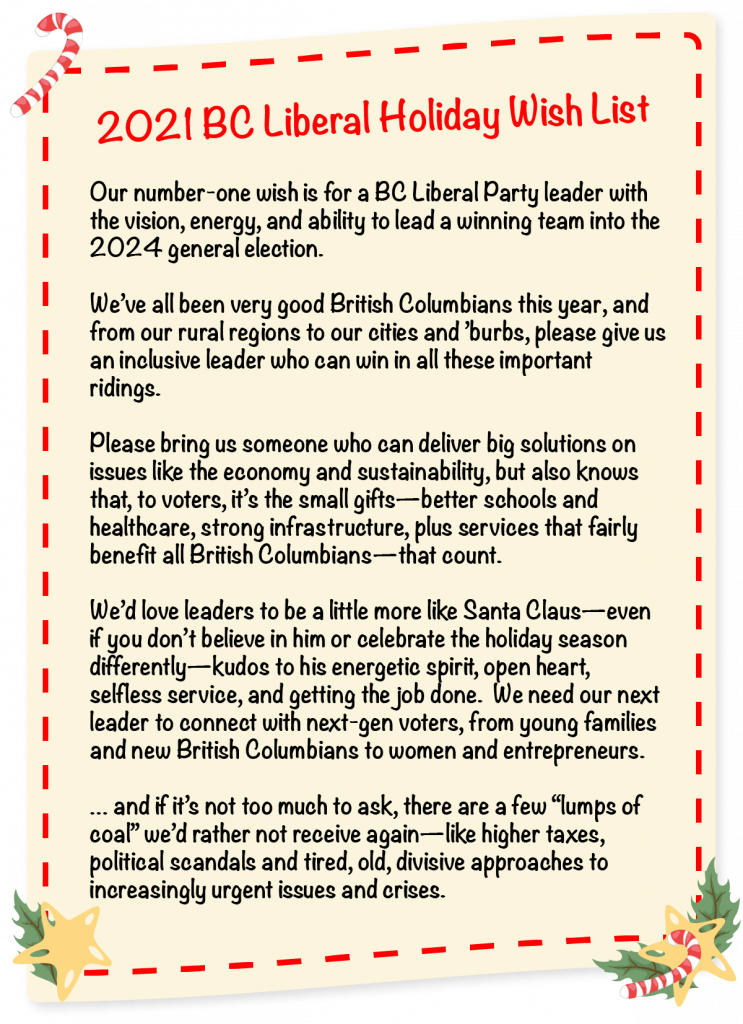 If you’ve window-shopped the BC Liberal Party leadership offerings, you know that Val Litwin has started a social enterprise, run his own small businesses, rethought tired health-care models, and helped transform provincial government policy. Along the way, he’s tirelessly toured the province and connected with people one-on-one, where his passion, energy, values, and integrity are undeniable.

Val checks all the items on the list. He’ll offer the real gift of transformative change, renewal, and new energy to British Columbia.

I have worked under every leader BC Liberal Party leader since 1991. Now I look forward to working under Val. I hope you’ll consider joining me in voting for Val Litwin as the next leader of the BC Liberal Party.

P.S. What’s on your wishlist? Is Val Litwin at or near the top of your wishlist for leader of the BC Liberal Party? Let us know.

We’re building something special. Stay in the loop.
Subscribe for regular updates.

Don’t worry, excessive political emails aren’t our thing either. We won’t share your info with 3rd parties and you can unsubscribe at any time.

© 2021 Val Litwin Campaign. Authorized by Vilja Jaako, Financial Agent for the Val Litwin Leadership Campaign, [email protected]
This site is protected by reCAPTCHA and the Google Privacy Policy and Terms of Service apply.